Exchange is an important part of life in Yap as it is in all cultures. Yapese have used intriguing stone money for centuries. It is found nowhere else in the world. The first stone money quarrying in the Palau Islands may have begun as far back as 125 A.D. The sparkling rock is a form of crystalline calcite that is found primarily in the colorful glistening walls of limestone caverns.

Hundreds of voyages followed the initial trip to Palau. Many men attempted the Stone Money’s hazardous passage and more than a few perished in the process. The 250-mile canoe journey took about five days one way if the weather was good and required skillful sailing. Transporting the larger pieces of stone money that are now a familiar fixture in most Yapese villages was an arduous task, greatly increasing its value.

Until the twentieth century, many Yapese and Outer Islanders decorated their bodies with intricate tattoo patterns. Three distinctive types (Yol, Gachow and Salbachag) were used to designate high status, expertise in fighting or simply personal preferences. The process of tattooing the legs or full body involved a great deal of pain as soot was burned into the body to make the exquisite designs.

There are still tattoo masters the Outer Islands, and, while full body tattoos are increasingly rare, more than a few Yapese and Outer Islanders have local tattoos of popular images like dolphins or birds on their torso.

The Arts in Yapese Society

It begins with a thunderous clap, repeated over and over by a line of solemn dancers until a simple rhythm is firmly established. From the center of the line a solitary voice emits a powerful rasping wail introducing a story told in a forgotten tongue. The hypnotic sound of the wailer's voice floats out across the earthen dance amphitheater with its ancient, ceremonial stone seats and backrests and over the moonlit sea. All within hearing range are captivated, transported through time to a mystical bygone era. Suddenly the single voice is joined by a mighty, reverberating chorus of voices bellowing an ancient chant – the dance is joined.

Yap's most highly developed art form, dance, or "Churu" is a central part of the State's culture. Ultimately, Yapese dancing is a form of storytelling and oral history. There are four main types: Sitting, Standing, Marching and Bamboo. Traditionally, dances are segregated by sex, although in recent years bamboo dances have been performed jointly by men and women. Bamboo and Standing dances are particularly taxing physically and are usually reserved for the young. Yapese and Outer Islanders begin dancing at a young age and may dance until well into their fifties when the fluid movement necessary for dancing begins to be more difficult to maintain.

Dances often tell the stories of canoes, or conquest, and more recently, religious events. Many dances are laced with double meanings and some, such as the "Gaslew", a dance for men that women are forbidden to watch, are quite bawdy. (Of course, if women didn't manage to watch the "Gaslew", chances are the young men would have given this type of dance up long ago!) One intriguing kind of dance that is not as frequently performed anymore is the "Tayor", which is performed by women at multi-village celebrations called "Guywol." During the dance the women may ask for anything in the host village that they want – food, stone money or even a canoe – and the host must generously furnish it!

Dancing is an interactive sport in Yap, with the observers playing the role of coaches and critics. Old men or women usually occupy the choicest seats and are merciless in their criticism – exhorting the dancer to get down lower in the painful crouch that is their primary stance or to make sure their eyes follow the rhythm of the dance. Given the intense scrutiny, dancers often practice, by the light of the moon, for up to a year before a major performance.

Dancers wear beautiful costumes, like multicolored hibiscus skirts, and ornamental head-dress, and cover their bodies with flowers, coconut oil and yellow turmeric powder prior to performing.

Stone money is by no means the only Yapese valuable. The most highly valued money on island is called "Gaw" a necklace formed of shells and whale teeth. This valuable is reserved for chiefs. "Gaw" was first brought to Yap by the ancient navigator Angumang of Teb village in Tomil. According to legend, Angumang discovered the shell necklaces while on a voyage to Udot Island in Chuuk lagoon. While there, he saw some beautiful strings of shell worn around the waists of a group of Chuukese women who were performing a dance. Captivated by the beauty of the shells, Andgumang decided to obtain them and, late at night, stole nine from the area where the women put them for safekeeping.

In the morning, the Chuukese discovered the theft and suspicion immediately fell on the outsider, Angumang, who was down at the beach preparing to depart for Yap. An expedition of Chuukese men was quickly rounded up and sent to the beach to search Angumang's canoe and retrieve the stolen valuable. After an exhaustive but fruitless search, though, the Chuukese were forced to release Angumang and his crew who piously proclaimed their innocence.

Sometime later, Angumang and his crew arrived in Yap. They had many stories to tell and were loaded down with gifts obtained during their long voyage; among them were nine ropes of shells that made beautiful a man wearing a shell necklaces – gifts from the people of Chuuk. Unbeknownst to the Chuukese, Angumang had hidden the stolen goods in hollowed pieces of bamboo on his boat!

Another important Yapese valuable is "Yar", or shell money. There are four kinds of Yapese shell money that are used for important events like marriage proposals and celebrations, as well as to tender traditional apologies. Shell money is also used as payment for local medicine.

One kind of shell money comes from Palau, another from the Philippines and Indonesia. The third kind of shell money comes from a sunken coral island 35 miles north of Yap called Seepin, and the fourth is indigenous to Yap. The types of shell money are easily distinguished by Yapese based on the coloring on the insides of the shells. Some of the shells are whole, while others are cut and attached to decorated wooden handles, coupled like an oyster shell, or put in groups of five on lengths of coconut rope.

There are important norms governing the exchange of shell money that are passed down from generation to generation, and the Yapese pay close attention to the type and number of shell money that is offered during exchanges. An inappropriate offering may result in under- or overpayment for a particular service and can be refused, much to the embarrassment of the offering party.

Traditional Sailing Canoes and the Art of Navigation

The Canoe – pliant and beautifully organic – binds the sea to the land. Powered only by plaited leaf sails and human sinew, guided by the winds of trade and the timeless maps of the firmament and ocean depths, it is perhaps the single most important symbol of the Pacific and its islands. In Yap, the image of the central role of the majestic and ancient craft held in keeping the Yapese empire intact.

Six different styles of canoes were used in the Yapese empire for specialized tasks like cargo transportation or intra-island travel. The most commonly known style of Yapese canoe is the distinctive two-pronged bow "Popow", a sleek, seagoing vessel used for the long voyages to Palau and other distant lands.

Building a canoe was a highly complicated task, shrouded in magic and ritual. It required the cooperation of many men and women and the skills of a master craftsman. First, a large mahogany or breadfruit tree was chosen. Carefully, the builders dug the tree from the earth rather than cutting it. This prevented fissures and ensured the strength of the wood in the unforgiving high sea waves. Then the men gathered in large groups to move the wood closer to shore. Strengthened and prodded on by ancient hauling chants, they pulled the massive timber to the preparation site. Women gathered pandanus and began the fine weaving needed for the canoe's sails, while men labored tediously with stone, shell or metal adzes to hollow the canoe hull. Breadfruit tree sap and coconut husks and fiber rope were used to glue and tie the upper and lower portions of the hull and to attach the single outrigger, which was made with bamboo, breadfruit tree and coconut fiber rope. Finally, the finished craft was painted and put to sea amidst dancing and ceremonies, and its pandanus sail was unfurled into the wind, held aloft by a towering reversible bamboo mast.

Traditional navigators crossed the treacherous waves in search of adventure without the aid of modern navigational tools or even a simple compass. Their tools were the celestial compass – a system of 32 stars whose positions and movements they memorized – and directional messages from the crisscrossing swells of the ocean. Traditionally, instruction in the navigational arts began at an early age and was one of the most highly guarded secrets of each island clan. Master navigators held an exalted position in traditional societies and lived lives governed by strict adherence to taboos and magic rituals.

The art of canoe construction and traditional navigation are still practiced in Yap State today, although many of the magic rituals and initiation rites have been forgotten or abandoned. Outer Islanders have been more successful than the people of Yap proper in their efforts to pass the skills of canoe building and navigation on to younger generations. This is due in part to the important role canoes still play on many islands where motorboats are not practical or affordable, and in part, to the active measures that have been taken by traditional leaders, craftsmen, and navigators to preserve and pass on their skills. On Yap proper, there are only a few active canoe builders, mostly from the Northern municipalities of Maap, Rumung and Gagil. There may well be no master navigators left on Yap proper. Most of the craftsmen are aging too, and unless steps are taken soon, this art form may be lost to the Yapese people.

Tourism is a new and exciting business for the people of Yap. The island entrepreneurs are working to meet the challenge of preserving the special island customs while living and working in the 21st century. Even as the traditional lifestyle is quite evident all around Yap, modern amenities and superb dining can be found. The list of ecologically and culturally-oriented activities continues to grow. Water and adventure sports are especially rewarding activities for our visitors. We sincerely hope that this website will pique your interest in our islands and motivate you to come discover Yap's fascinating culture, fabulous underwater kingdom and friendly people.

The Yap Visitors Bureau has created three annual events where visitors get to experience the magic and beauty of the Yapese people and their island culture. 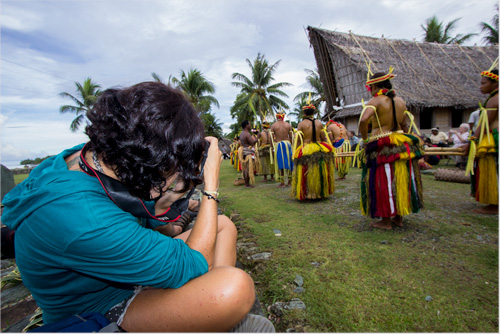 It's the most colorful day of the year with traditional dances, crafts, tatoos, competitions and demonstrations in ceremonial dress. 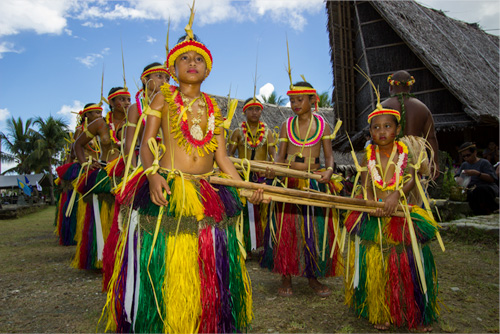 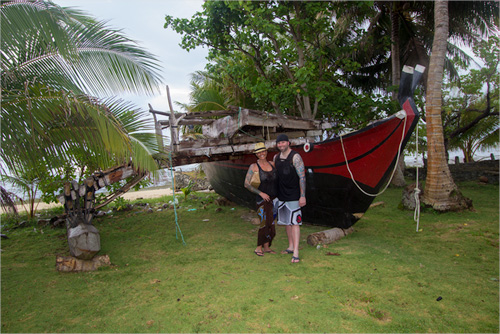 The people of Yap have a lot to offer today’s world, coming from a land where sustainability practices are the way of traditional living. Yap has protected its waters for the manta rays, sharks and turtles that reside here by creating the world’s first Government-backed big animal sanctuary. 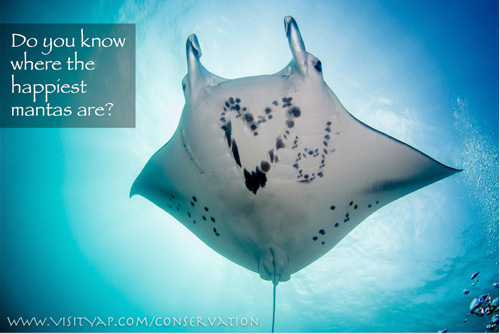 Read how Yap State law 7-36 came to be on this small island. 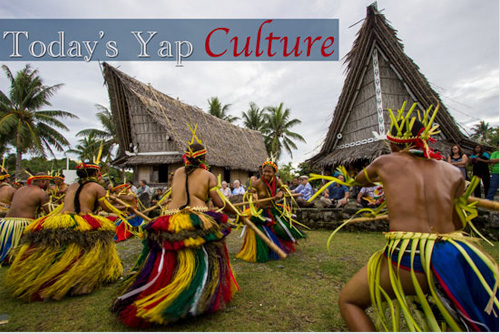 Today’s Yap culture is a mix of ancient traditional values and the modern world.

Yapese people are living in two time periods simultaneously by working in 21st Century offices while preserving their culture, traditional lives and values at home.

See how the ancient and the broadband worlds mix.

This error message is only visible to WordPress admins